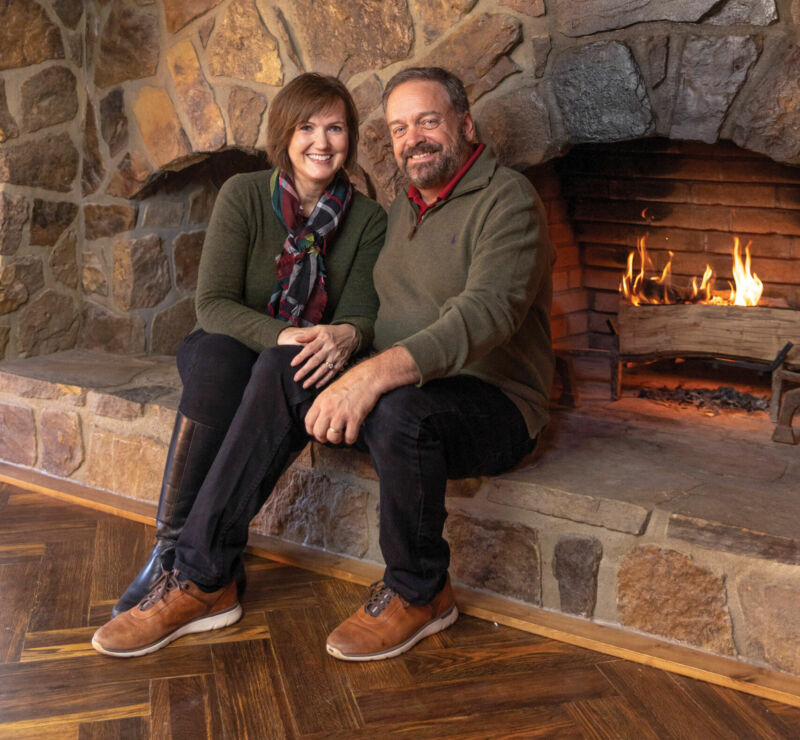 Every time Michelle and Ralph Trieschmann told people they were renovating the old Jim Barna Log Homes offices off Highway 27, they got the same look.

The expression became something the Trieschmanns grew to know well in their early days turning the property into Timber Rock Lodge, a 12,000-square-foot boutique inn and event venue. It was disbelief, suspicion and curiosity: “Who are these people, and what exactly are they going to do?”

For decades, the community had been invested in the property, and people felt protective. Many had either worked for the late Jim Barna or helped build the structures themselves. The sprawling, 60-acre tract was unique. The land, perched on a hidden hilltop between Oneida and Winfield, included an enormous log building that had undergone conversion from Jim’s humble original log home into a sprawling office building. Another log cabin that once served as a model home and sales office sat near it. The whole property would require a special kind of dreamer to take it on.

Enter the Trieschmanns. The couple had been living in St. Louis when the COVID-19 pandemic hit. Ralph, an executive with Enterprise Rent-A-Car, took an early retirement package after the travel industry ground to a halt. Michelle, a Scott County native, had met Ralph years earlier at University of Miami in Florida where they were both enrolled in the master’s of business administration program.

They weren’t quite ready to retire, and they also wanted to live near Michelle’s parents, James and Joann Walker, of Robbins. So, they took a look at the Barna property in 2020 on the advice of a good friend whose husband had once worked for the log home builder. After a visit, the couple saw the potential. They envisioned a beautiful, well-appointed inn with unique rooms for travelers and a beautiful space for weddings, parties and other special events. The former model home could even serve as their private residence. The price was right, too, so they bought it.

Finding workers and contractors in the early days of the pandemic was surprisingly easy for the Trieschmanns. Nobody quite knew what would happen next, and workers were afraid not to take on a job. After fixing up the model home, they started renovations on the big house in February 2021. At first, the couple didn’t realize how many people shared a connection with the property. Barna himself had trained their contractor, James Posey. The Trieschmanns even found the person who had originally designed many of the additions and knew every nook and cranny. Even the Highland Telephone technicians and other electricians remembered it. Everyone had a story.

Still, many remained skeptical of the newcomers. “At first, it felt like they were worried we were changing Jim’s building,” Michelle says. “I think it felt wrong to them at first. They would worry about us wanting to tear down a wall, and they weren’t always sure about our vision for the place.”

That feeling changed as the rehab continued, however. The couple worked with local craftspeople and bought materials from local companies. They added, moved or removed walls to reconfigure the space, and modernized the interiors and infrastructure. They exposed the gorgeous wood floors that carpet had covered, and they replaced fluorescent office lighting with elegant chandeliers and energy-saving LED bulbs.

“We approached it like we were designing a place in Yosemite National Park or a grand mountaintop resort,” Michelle says. “Our idea was that people from all over the country need to see how beautiful this region is. They’re already coming to see the Big South Fork with all its unbelievable trails and waterfalls. Why not give them a beautiful lodge as a base camp?”

They also knew their inn filled a unique niche for the region. With 13 guest rooms with private baths — including the Barna Suite and an accessible room for wheelchair users and people with disabilities  — the couple created a wooded retreat for visitors and locals alike. Guests can unwind but still stay connected with HTC’s gig-speed internet, Wi-fi and access to streaming services. A full, caterer-friendly kitchen and various event spaces give wedding and event planners the ability to design the perfect celebration.

The lodge hosted its first event in March, and word is getting out. Along with weddings, business conferences and other special events, the couple plans to host pop-up date-night dinners with local and regional chefs. They’re also thinking about murder mystery nights, live music and other activities. They’ve already partnered with Katie Kidd and The Skin Clinic to operate a satellite location inside the lodge’s spa.

“We designed the spaces throughout the building to be open and usable for whatever,” Michelle says. “We want people to come in and say, ‘Oh, wow! I want to do this or that.’”

But they also hope the community understands the respect and love they’ve put into it. “We want to bring positive attention to the area,” Michelle says. “We want to serve the area, but we also want to highlight it. It’s such a hidden gem.”