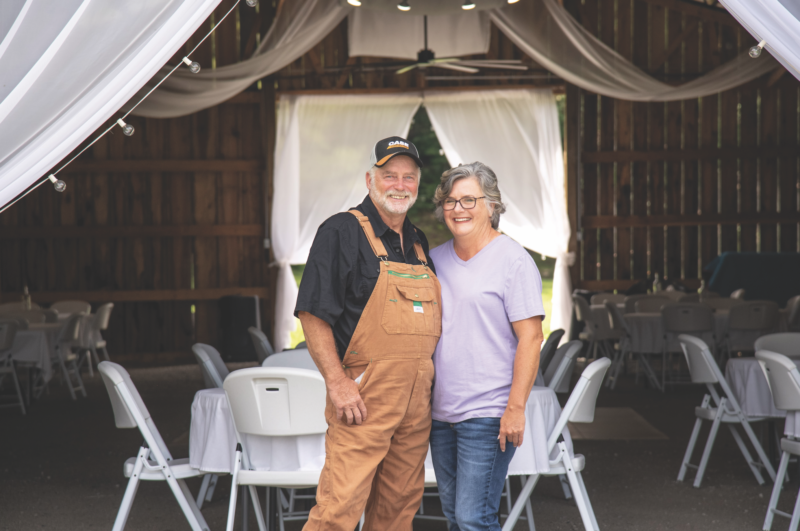 Lorene and Tim Chitwood aren’t exactly sure when Tim’s ancestors first laid claim to the family farm. But they’re pretty sure 1,200 acres of the Winfield property was deeded to the family just after the Revolutionary War in gratitude for their military service.

Over the years, the family subpided and sold parts of the farm, leaving the Chitwoods scrambling to retrieve it when they could. In all, the family now owns 300 acres — some of which is from the original Chitwood family farm. “We acquired part of it in 1990,” Lorene says. “Then, we bought more in 2005 and 2013.”

Today, Tim and Lorene still work the farm for cattle and hay, but Chitwood Mountain Farms now also offers a venue the couple built for hosting weddings and other special occasions. “It’s so peaceful and so beautiful,” Lorene says. “We wanted to share that with other people. There are so many venues out there, but not everybody has the views we offer.”

Not everyone has a farm registered with the Tennessee Century Farms Program, either. The Center for Historic Preserva- tion at Middle Tennessee State University runs the program, identifying, document- ing and recognizing farms statewide that have belonged to their owner’s family for at least 100 years. Dr. Antoinette van Zelm, assistant director of CHP, says tracking the farms is a way to preserve the rich agricultural history of the state. So far, the program has certified more than 2,085 farms since it officially started in 1985. However, not all of those farms still qualify as Century Farms due to families selling land or other factors.

For the Chitwoods, the opposite is true. The family has worked hard to recover as much of the original farm as they could over the years. “My husband loves this place so much,” Lorene says. “He grew up a farmer, and his grandfather was a farmer. The farm is his passion.”

Tim spent much of his adult life making a living away from the farm, however.

He worked in oil fields and on railroads, until the couple decided to build an event venue for hosting weddings in 2016. Now that he’s home for good, he’s probably the happiest he’s been in years, Lorene says.

The couple designed and built the barn from the ground up. Tim milled the wood for the structure at his own sawmill, and they incorporated a kitchen, groom and bridal rooms, and bathrooms inside the rustic, 4,300-square-foot facility. They also added a gazebo overlooking the rolling hills of the property. “It’s kind of like a huge she-shed,” Lorene says with a laugh. “But really, it’s too beautiful not to share with the community.”

Since opening, the family has hosted proms and birthday parties, but they like to focus on weddings. They provide seating for 100 people, but they’re able to fit about 250 to 300 people in the space. Besides the event barn, couples can choose to hold their wedding in the gazebo, in front of the barn or in any number of picturesque settings.

“They can bring their own foods, or they can have it catered,” Lorene says. “I try to make it as easy for them as I can. I want the family and the bride and groom to be able to enjoy their day.”

This year has been the venue’s busiest since it opened. “We’re not heated, so we don’t have many events in the winter,” Lorene says. “Spring through fall is our busy season, and I think COVID-19 forced a lot of people to cancel or postpone their weddings for the last couple years.”

Lorene also credits her Highland Communications internet service for keeping the business up to speed. In the wedding industry, social media is essential, she says. “We use it for pretty much everything,” she says. “Our whole business relies on it. Facebook has become so important to people in our business. We can share photos and keep in touch with our clients. It’s the way we connect with people.”

The farm’s Facebook page also offers stunning drone footage of the property, giving potential clients an idea of what they can expect — peace and a connection with history and nature.

“While we were getting ready for a recent event, the wedding planner said she just wanted to stop working, sit down and take it all in,” Lorene says. “The whole place has this serene quality I’ve never experienced anywhere else.”