Skip to content
Home Broadband Success Stories On With the Show
Posted: July 27, 2022 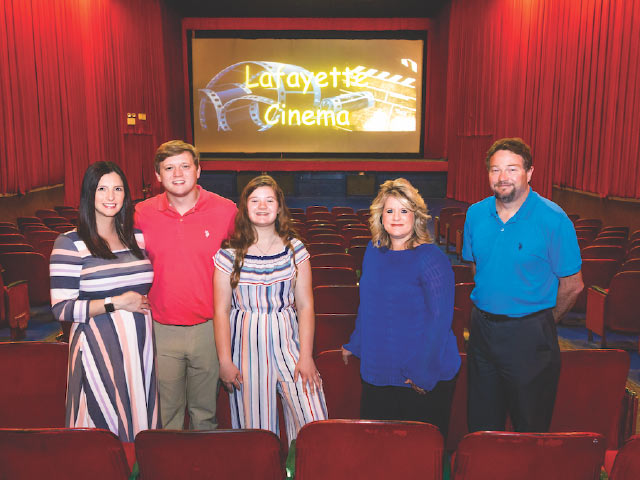 As a kid, Eddie Warner loved the moment when the lights in the movie theater dimmed and the audience hushed in anticipation of the next big blockbuster. “I remember all the movies I went to see in the theater,” Eddie says. “I was a kid when I saw ‘Jaws’ and ‘Star Wars,’ and I can still remember that experience.”

Eddie’s nostalgia for movie theaters led the former welder to buy Lafayette Cinema, the city’s only movie theater, back in 2005. Since then, he and his family have made it their goal to create a modern — but affordable — movie experience for everyone.

Making Memories at the Movies

The all-digital, one-screen theater includes surround sound and a 21st century experience, but ticket prices at Lafayette Cinema remain stuck in the 1990s. For $5, anyone over the age of 10 can get a seat, while those for viewers ages 4 to 9 cost $3. Kids under 4 years of age watch for free. On Mondays and during Sunday matinees, tickets go for $3.

It’s a big difference from other first-run movie theaters across the country that charge nearly twice as much for a flick. “We want it to be affordable so everyone can come see a movie,” Eddie says. “We try hard not to price people out. We try to be fair about all of it. The fact that we’re here in Lafayette also helps local people. They don’t have to spend money on gas to drive to other cities to see a movie.”

To keep prices low, they don’t accept credit cards because credit card companies charge fees that get passed on to the consumer. Eddie and his family also work with volume in mind, and they keep costs down by running the theater themselves. “We all pitch in,” he says, referring to his wife, Priscilla, the couple’s two children and their daughter-in-law. “The biggest input is our time. But it’s kind of fun, even though we’re working. We always meet up at a certain time right before we open the doors. We get to hang out with each other, and it’s nice to have a common purpose.”

The family also takes its responsibility to the public very seriously. Per their policy, they stay open despite weather conditions and low ticket sales. “We have people coming from all over the region because of our prices,” Eddie says. “We try not to close for any reason unless there’s a safety concern. We don’t want to disappoint people who had to travel to get here.”

Running a family-owned business does have its drawbacks. “It can make taking a vacation difficult because we’re always working when other people are vacationing,” he says.

In 2013, Lafayette Cinema went digital, meaning the Hollywood films to be shown came in online instead of in big film canisters. “Before that, we used actual film, and we had to splice everything together,” Eddie says.

Modern cinemas require high-speed internet service, and North Central Telephone’s ultra-fast fiber network has been a game-changer, Eddie says. “NCTC is an integral part of our business. We couldn’t do it without them because we couldn’t communicate with the movie companies or download the codes we need to show the movies.”

And while high-speed internet has been a double-edged sword for the movie business, streaming services in people’s homes haven’t affected Lafayette Cinema as much as the corporate theater companies. “We still got people in seats even when first-run movies were streamed online at the same time as they came out in the theater,” Eddie says. “I think that’s because people come for the same experience as I did when I was a kid. A comedy is even funnier when you can hear other people around you laughing. And people tend to remember the experience and the movie itself more when they see it in the theater.”