The pandemic and soaring home prices have helped fuel a nationwide trend of leaving big cities behind for life in the suburbs and beyond, making what used to be thought of as retirement destinations for many now a place to work, play, and raise families.

Especially attractive are rural areas where robust internet service makes remote work possible even for people with major broadband requirements. A great example is the Cumberland Plateau area of Tennessee.

Exhibit A is Labrum Law. That’s the middle Tennessee injury law firm headed by Harlene Labrum, who moved from sprawling Spring Hill near Nashville to a high spot overlooking Center Hill Lake about a year go with her husband, Kurt, who consults on administrative work for various companies. 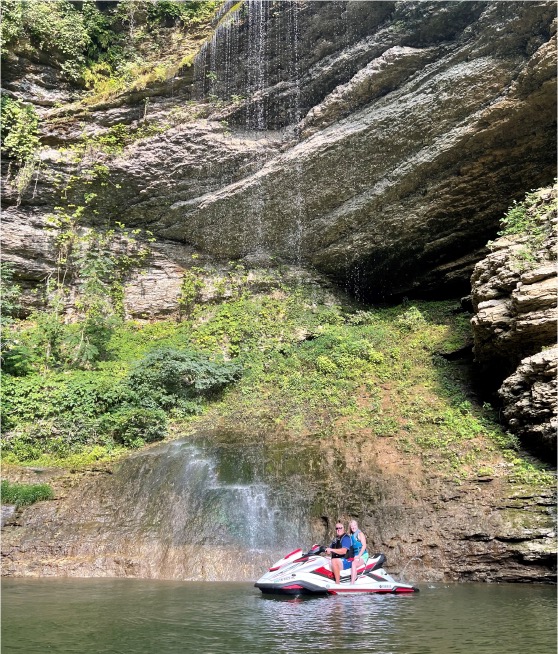 Center Hill Lake covers more than 18,000 acres and has 415 miles of shoreline with open water, inlets, and coves attracting lovers of water sports of all kinds. The lake itself has multiple amenities, including dozens of marinas, boat ramps, swimming areas, and surrounding hiking trails. Yet, it retains its rural setting and charm.

“We love Tennessee! We love the simple country, quality of life and the undeniable beauty and peace of the scenery. We are very fortunate to live on Center Hill Lake with amazing mountain and lake views, hiking nearby, and modern amenities of shopping and restaurants just 20 minutes away in Cookeville,” Kurt Labrum says. “The best part of living in this area is that neighbors are kind, considerate, family-focused and down to earth.”

The Labrums and their sons — now college students — were frequent visitors to Center Hill Lake over the years and had long dreamed of moving here. Sensing the time was right, they found the perfect house but had to make sure the digital service was robust enough to keep Harlene Labrum and her five paralegals securely connected while away from their Murfreesboro and Nashville offces, which is most of the time.

They found that Twin Lakes’ fiber accommodated their need for three different connections, one on each floor of their mountainside dream home, a need they discovered soon after moving in.

“Our seller had just one connection in the basement and it worked for her, but we work on different floors and are constantly in Zoom calls and running multiple apps,” Kurt Labrum says. “The Twin Lakes techs were great and so was everyone else. We quickly determined the problem and got a connection for each level of the house, plus their home security systems. It’s nice to work with a business who listens and takes care of you. That’s not easy to find anymore.”

From San Diego to Cookeville with Six Screens, Five Dogs, and a Young Family

Then there’s Andre Pollesel, a self-described “Millennial geek” who moved last March with his wife, five dogs and three cats from Southern California to a 22-acre piece of secluded land near Cookeville, where he hasn’t missed a beat in his demanding job of trading bonds and securities for a financial technology company.

“I’d say space, scenery and solitude are all the biggest factors for us. We have a ton of animals and want to add livestock and horses too down the road. Rural country living is not for everyone though even if they do have the fastest internet around. The backcountry roads are not for the faint of heart and unless you’ve been raised in areas similar to this it can be very hard to adapt,” he says.

But closer to town, Cookeville itself sits astride Interstate 40 about 80 miles from Nashville and has been ranked by Rand McNally as one of the top 10 best places to retire in America. With a population of about 35,000, the charming, affordable town features old-timey stores, trendy shops, and a thriving educational community anchored by 10,000-student Tennessee Technological University. Step outside of town, and you’re in a world of woods and lakes (including more than 150 waterfalls).

That’s what helped seal the deal for the Pollesel family – which now includes an infant daughter. They fled high-priced San Diego for a lifestyle more akin to the rural northern California that Pollesel remembers from his childhood. “When the pandemic hit in 2020, I saw the writing on the wall and asked my boss if I could work remotely, I mean as in moving away,” Pollesel says. “He said that was fine, as long as I could stay connected.” Although they could move anywhere, only communities with fiber internet were up for consideration. Pollesel’s job requires the use of multiple HD TV screens. And with an appreciation for technology already well-developed, he’s become an expert on the fine details of broadband speed and reliability.

“Fiber is where it’s at, and it was definitely a determining factor in where we chose to move,” he says. “We found what we needed here.” Pollesel collaborated with Twin Lakes to create a network of connectivity using routers and access points that extends a few hundred feet away from the house, so they could even get a strong connection from outside.

That digital mesh is not just for surfing the web in the woods. The Pollesels have two different security systems through Twin Lakes, enjoying 360-degree, 24-hour visibility to the property around their home. “We can see quickly what our dogs are barking at,” he says. “It’s been a lot of wildlife.”

Like many other escapees from high-dollar, big-city markets, Pollesel was able to sell his California home for enough money to buy not only his new Tennessee home but a second home in the suburbs of his wife’s hometown of Charlotte, North Carolina.

There he gained even more appreciation for Twin Lakes’ broadband fiber. “Charlotte is one of the first cities to roll out Google Fiber. I measure these things closely and all the time and have been doing it for years. I assure you that Twin Lakes’ fiber is faster than Google’s is in Charlotte.”

The price also has been a revelation. “We had to use Cox Communications in San Diego, and they used copper coaxial cables. I was paying twice as much for about a third of the speed we have now in Cookeville,” Pollesel says.

He also takes a long view of all this. “We anticipate growth where we moved. It’s going to happen,” he said. “Tennessee has a reputation for great digital infrastructure and Twin Lakes is an example of that. You have this great technology and then you add in the personal service you just won’t get from those big providers. We couldn’t be happier.”