Having achieved FTTP (Fiber-to-the-Premise) deployment across its co-op-served areas in 2016, SkyLine and subsidiary SkyBest have since focused efforts on extending much-needed fiber connectivity and telecommunications services to new communities needing faster broadband speeds, including downtown Lenoir, areas of the Boone business district, parts of Linville and Mountain City.

Not far from Mountain City, just beyond our Shady Valley service area and past a section of Cherokee National Forest is the small community of Sutherland, situated at the northeastern top of Tennessee that borders Virginia on Highway 133.

“We first learned about Sutherland’s need for faster broadband last year from a resident of that community who had called in,” said Plant Manager Brant Davis. “We tried to make a business case for it, but the community was so small compared to the construction costs to make it work.” That is, until SkyLine learned of some available grant funding in late July through the Tennessee Emergency Broadband Fund, made possible by the CARES (Coronavirus Aid, Relief and Economic Security) Act passed by Congress to address such needs as enhancing broadband access to families affected during the Covid-19 pandemic.

Davis said the grant opportunity opened the door to funding that could help get the project underway. “To meet the grant stipulations to pass 48 service locations, over 9.27 miles, we had less than a four-month window of time to complete the project.” With costs totaling just over $280,000, the grant, which required a 20-percent match from SkyLine, was approved on August 21,2020. Work began immediately.

Residents in Sutherland had seen SkyLine vehicles in the area in recent weeks, and there were rumors that fiber might be coming to their community. “How are they going to get here,” wondered resident Rob Campbell, an IT professional who was receiving under 2 Mbps service from the incumbent broadband provider. At that time, his wife’s boss was letting him use some extra office space in his place of business in Abingdon where broadband speeds were much faster. “Our oldest son had come home from college due to Covid to begin virtual classes, and our youngest son’s high school was following hybrid schedule due to the pandemic, so we clearly didn’t have enough bandwidth in the house for our needs.” 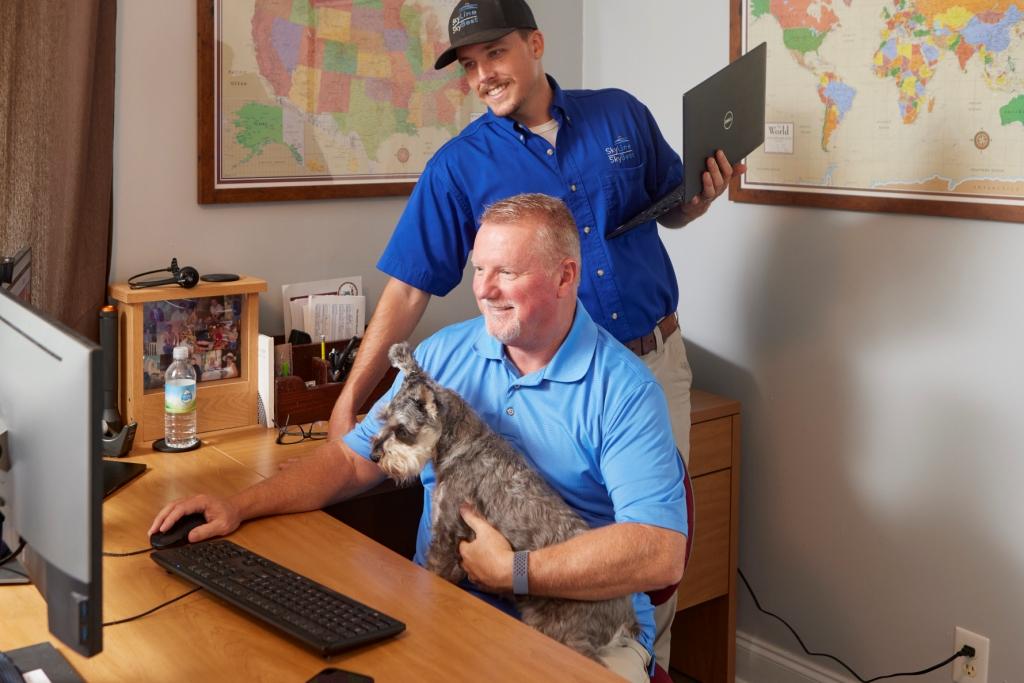 One day while driving toward Damascus, Campbell spotted one of SkyLine’s trucks and decided to follow it. Stopping at Cowboy’s, a local business, Campbell approached SkyLine’s Eugene Seatz about the potential fiber project. “First thing, Eugene gave me his business card, and said, ‘Absolutely. Not only are we doing it, we have to have it constructed and installed by December 15.'”

Working for a Fortune 100 company, Campbell oversees its desktop support services in multiple office locations across the US, and he frequently orders services from a host of telecom providers. “Lead times ordering circuits, ISDN or T-1 lines takes months,” he said. When you have service issues and area dealing with multiple providers, delays are the norm. In general, things move slow.

Campbell said he was skeptical about the likelihood of getting fiber so quickly. “I didn’t think it would happen, the enormity of it,” he said. For SkyLine, it was going to be a tall order to fill. “As our guys were field staking the project, they soon realized the terrain challenges we were facing with construction on this particular area and with the short schedule to complete it.” Davis said. “We learned of Treeline Helicopters through their work clearing right-of-way for Mountain Electric Cooperative, so this became a historic first for SkyLine to contract a helicopter service to help deploy 2.5 miles of fiber through the Cherokee National Forest to reach Sutherland.”

After seeing the helicopter and SkyLine crews at work in the Sutherland area, Rob Campbell was convinced that the project was moving forward. “I knew then that it could happen.” Campbell’s fiber service was installed on November 24. well ahead of the project deadline for customer installations, and he is among 27 Sutherland customers now receiving 300 Mbps symmetrical fiber broadband service, more than enough for him to work from home and for his sons and wife to access the content needed for school and work.

“I consider this a herculean effort by a company that had a vision of where they needed to go and the expertise to make it happen,” Campbell said. “SkyLine/SkyBest overpromised and over delivered.”