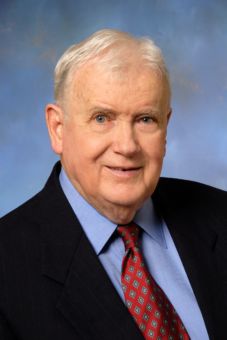 Bass passed away on Thursday, May 21, two weeks before his 99th birthday.

“There are people that stand out in your mind as leaders within the industry, and Jim Bass was definitely one of those,” says Levoy Knowles, executive director of the TNBA. “He has always been a leader, particularly on the political side of things.”

Bass, 98, was instrumental in forming the NTCA–The Rural Broadband Association, and he helped guide the organization into the modern era serving as both president and general counsel. He also founded the Telecommunications Education Committee Organization (TECO), which was a political action committee supporting candidates in favor of deploying new communication networks across rural America. The fund is now known as the NTCA Rural Broadband PAC.

Knowles says Bass was a true Southern gentleman and will be missed within the industry for his institutional knowledge.

“He has been involved in this industry a long time,” Knowles says. “No one else has the knowledge that he has.”

Bass, a Carthage native, graduated from Gordonsville High School in 1939. From there he attended Cumberland University until his education was interrupted by World War II. During the war, Bass served as a radio operator and an aerial gunner aboard a heavy bomber stationed in Conington, England.

He served in multiple battles during the war including the Battle of the Bulge, Rhineland Offensive and the Central Europe Campaign. For his role in the liberation of French prisoners of war, Bass received the French Foreign Legion Medal of Honor, the highest honor awarded by the French government. He also received the European, African and Middle East Campaign Medal with battle stars; the Air Medal with clusters; and the Victory Medal.

After the war, Bass resumed his education at the University of Tennessee where he received his undergraduate degree in 1947. He attended law school at Vanderbilt University, graduated in 1949 and practiced law until just a few weeks ago.