Lee spent much of his life working in his family’s business, Lee Company, which he eventually led. The Franklin-based company provides mechanical contracting, facilities and home services. It employs more than 1,200 people according to the company’s website.

The self-described conservative campaigned on several key priorities, including continuing the state’s economic development initiatives, expanding vocational education, ensuring that rural areas thrive, and rethinking the state’s criminal justice system. He is opposed to expanding Medicaid in the state but wants to find ways to reduce the cost of health care.

While on the campaign trail, Lee also commented on the need for broadband expansion in rural areas. “Lack of broadband service really does inhibit the ability of many rural areas in our state to prosper,” Lee told reporters and editors of the Chattanooga Times Free Press during a meeting last fall. 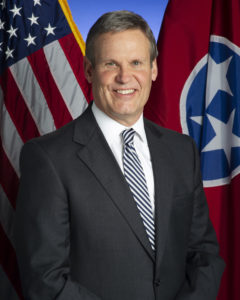 During the meeting, he noted he was open to the idea of lifting territorial bans that will allow some municipal utilities to expand. He also hoped private and public telecom providers could “work on finding a solution to expanding broadband coverage in rural areas.”

“This is possible if we just bring all of the interested parties together and figure out who is going to contribute what and who is going to give and take so that the citizens of Tennessee can move forward,” Lee told Times Free Press staff. “I think we’re not that far from it and that we can do it. I think there is enough recognition and understanding of the fact that Tennessee is not going to lead the country if we can’t figure out how to get technology into our far-reaching communities.”

In another statement published by the Commercial Appeal in August, Lee noted that rural broadband was necessary and needed: “I’m a product of rural Tennessee, and I know it’s a problem,” he said. “In fact, we don’t even have broadband at my house, and I know it’s a disadvantage. Whether it’s health care, economic development or education, we need broadband to support our rural communities.”