When President Donald Trump announced Ajit Pai as the new FCC Chairman, many leaders in the rural telecom industry breathed a sigh of relief. A Kansan, Pai is thought to be sympathetic to rural issues, which should benefit — or at least not harm — rural providers as he becomes the industry’s top regulator.

Shirley Bloomfield, CEO for NTCA–The Rural Broadband Association, released a statement praising Pai’s commitment to rural America. “Since joining the commission in 2012, Commissioner Pai has shown a commitment to solving rural broadband challenges and to thinking creatively about ways our country can more effectively deploy and sustain advanced communications in rural America. In an address to the NTCA membership in early 2013, Commissioner Pai was the first of his colleagues to call for universal service to enable broadband services in areas served by our members, and Commissioner Pai has consistently placed a spotlight on the kinds of resources and resourcefulness needed to connect America. Having grown up in a small town in Kansas and noting in his address to NTCA members that ‘rural America is different,’ he has a deep and genuine understanding of how the services that NTCA members deliver improve the quality of life and promote economic development in our rural communities.” 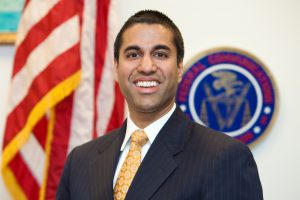 His FCC bio page says that Pai’s regulatory philosophy consists of the following:

President Trump still has to fill two vacancies on the FCC. One will be a Republican and the other is required to be a Democrat. No timetable has been set for those appointments.

Based on early reports, Pai has been busy. The New York Times reports Pai released about a dozen actions in his first week on the job.

Here’s a roundup of headlines on the changing faces at the FCC: