Thirteen percent of Tennesseans don’t have broadband access, and most of them live in rural areas, according to the state’s recently released broadband assessment.

And, Economic and Community Development Commissioner Randy Boyd says it’s probably going to take a mix of fiber and fixed wireless provided by telcos and electric providers to reach the residents who still lack access.

“I imagine that when we finally come up with a solution across the state, it will be some blend of those different solutions,” Boyd said in a phone interview.

In addition to access, the assessment also provides insight into customer demand. According to the assessment, more than half of Tennesseans (52 percent) don’t believe a 10 Mbps connection has enough capacity to meet their needs, and 29 percent say a 25 Mbps connection is still not adequate.

The full report is available by clicking here. Here are some of the key takeaways from the assessment and the interview with Boyd:

Tennessee looked at what’s worked in other states.

The study carries heavy legislative implications, and the governor is taking the lead.

In the ECD press release, Governor Bill Haslam announced he was putting together a working group to come up with policy suggestions for the legislature.

“The information in this report is a starting point to advance the conversation about broadband access in our state,” Haslam said. “An internal working group will review the report and have discussions with stakeholders to develop potential solutions to close the gap on broadband access in Tennessee.”

Boyd sees the formation of this group as a “huge sign of something significant and positive to come in the future.” Boyd says he sees “a broad menu of options” going forward, and he’s looking for a win-win-win. He expects some “new solutions being proposed when the legislature comes back in” and expects electric providers will have “a huge role to play.” He said the legislature will decide the role of municipal providers in the future, and his office is only providing information.

Rural areas lag behind in access, and that’s bad news for rural economies.

As a whole, 13 percent of Tennesseeans, representing 834,000 individuals, do not have access to broadband under the 25/3 Mbps definition. But drilling deeper, only 2 percent of city dwellers are lacking connections while 34 percent of rural residents do not have access. “There’s a dramatic digital divide between the cities and the rural parts of our state,” Boyd said.

The urban/rural split, which Boyd described as “incredibly significant” and having “tremendous disparities,” has worrisome implications from education to entrepreneurship. While statewide unemployment, household income and GDP numbers are at all-time highs, according to Boyd, 21 of the state’s 95 counties are in the bottom 10 percent in the United States in poverty and income. “We’re leaving a lot of our neighbors behind, and one of the things that we wanted to focus on was to … find a way so everybody gets to participate in that success,” he said. “Many things depend on broadband access. I get the question from time to time, ‘Broadband? That’s got nothing to do with economic development,’ and I think it’s got everything to do with it.”

Connecting all of Tennessee will be expensive.

The assessment also sought to determine to cost of connecting every Tennesseean. The study acknowledges that fiber-to-the-home is the best option, but the costs are significant. To deliver 25/3 Mbps service across the state over fiber would cost $1.1 billion to $1.7 billion. “It’s never implied that the state of Tennessee or any one particular person would have to pay this,” Boyd explained. “It will probably be a combination. Somehow, somebody is going to have to make that sort of investment.”

The cost for fixed wireless to provide the same speeds came in lower at $500 million to $1.3 billion. “I imagine that when we finally come up with a solution across the state, it will be some blend of those different solutions,” Boyd said.

Municipal electric providers and fixed wireless are probably part of the answer.

Some of the best practices from other states suggest getting electric providers involved. Boyd said municipal providers were “definitely one of the stronger options on the list,” and many people involved believe electric cooperatives have a “big role to play” if it’s done in a “not anticompetitive manner” that “seems fair.” He’s hopeful that TTA members will be “key players in providing the solution in the long term.”

The assessment also looks at competition among internet service providers, suggesting that areas with more service providers have higher speeds for both businesses and residents. The average download speed for businesses with access to only one provider was 22.5

People care about their broadband and want faster speeds.

Boyd said he thought the consultants’ goal of 4,000 responses was too high, given that the survey took about 20 minutes to complete. He was shocked to see 23,000 responses, including 18,000 homeowners and 5,000 business owners.

“It was incredible,” Boyd says, “which I think tells us 1) that people feel like this is important and 2) that they care about it enough to take the time and fill out the survey.”

The assessment shares some enlightening numbers about residents’ need for speed: 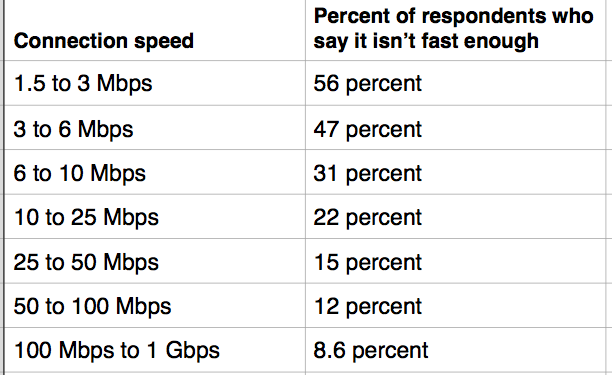 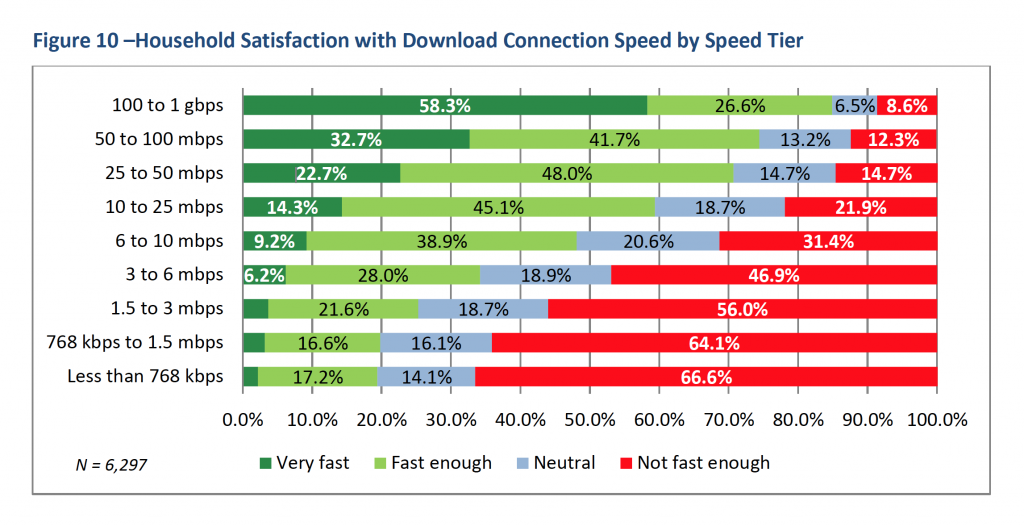 Only about 5 percent of assessment respondents (821 individuals) reported no internet at their home. Over half of those cited a lack of availability as the cause, with affordability as the second most frequent barrier. Only 2 percent said they did not need internet service. Interestingly, the study showed no clear correlation between not having an internet connection and

Broadband is good for business.

The report gives providers a lot of information. Boyd said county and census track-level data will also be available upon request in the future.